There is a huge shift underway to incorporate personalized medicine approaches in treating depression.The new Lancet study showing antidepressants do work puts to rest doubts about the effectiveness of antidepressants. More importantly, this compelling evidence supports our efforts in designing AI-driven, decision-support tools that empower doctors to personalize antidepressant medication so patients can beat depression sooner. 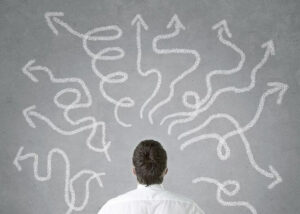 For the last decade, there has been a huge medical debate over whether antidepressants actually work.

In fact, this is one of the reasons why I started Taliaz. Our flagship Artificial Intelligence (AI) algorithm, Predictix Antidepressants, aims to help doctors prescribe the “right” antidepressant sooner.

So it was with keen interest that I read the recent study published earlier this week in the Lancet – in essence putting to rest doubts about the effectiveness of antidepressants.

As I have always believed, the challenge we are facing, is not that antidepressants are ineffective, but rather, we need more information to help our doctors know which is the best antidepressant medication for each of their patients.

However, before I discuss in more detail where I believe efforts should focus on to help us beat depression, let me provide you with a summary of the Lancet paper.

Over the last six years, a team of international researchers, led by Prof. Andrea Cipriani from the University of Oxford performed one of the most comprehensive systematic reviews and network meta-analysis on antidepressant data.

The Lancet study looked at any published and unpublished data the researchers could find that was completed by Jan 8, 2016 – in effect 28 552 citations and 522 trials comprising 116 477 participants!

This included trials involving 21 antidepressants used for the acute treatment of adults (≥18 years old and of both sexes) with major depressive disorder. They analyzed data from studies comparing the antidepressant versus placebo (placebo-controlled) or comparing two different medicines (head-to-head studies).

The research specifically looked at the primary outcome of efficacy (response rate measured by the total number of patients who had a reduction of ≥50% of the total score on a standardized observer-rating scale for depression), as well as secondary outcomes including endpoint depression score, remission rate, and the proportion of patients who dropped out early because of adverse events.

The team describe the study results as “the best currently available evidence base to guide the choice about pharmacological treatment for adults with acute major depressive disorder”.

So what did they find?

Furthermore, as expected, they found that some antidepressants were more effective than others or better tolerated than others. The graph from the Guardian shows the differences in effectiveness of some of the common antidepressants. 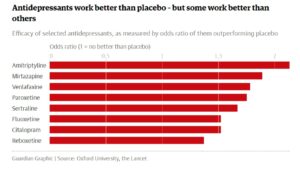 One of the most famous antidepressants, Prozac (fluoxetine), was among the least effective but best tolerated, measured by a low drop-out rate in the trials or fewer side-effects reported. The most effective of the drugs was amitriptyline, which was the sixth best tolerated.

So why is this study important?

We live in a world where depression is the leading cause of disability worldwide, an estimated 350 million people are effected globally and it is continuing to grow! Furthermore, it brings a massive economic burden posing a huge challenge for our health systems. In the USA alone, depressive disorders have been estimated to cost more than US$210 billion annually, with approximately 45% attributable to direct costs, 5% to suicide-related costs, and 50% to workplace costs!

Moreover, antidepressants have received bad press over the years!

Questions have been raised over their effectiveness versus the placebo effect – those given dummy pills also improve to some degree – seen in several published papers in the late noughties. This is combined with the fact that some patients simply do not want to take pills for a mental health condition.

Doubts about their effectiveness have also been raised as we are still learning about the pathophysiology of depression. As I have discussed in other blogs, genetic research into depression has emphasized the complexity of the disorder, as well as the need to understand patient’s environment.

This Lancet study helps us say with utmost conviction antidepressants work. This is important, as with growing numbers of patients suffering from depression, millions more people could benefit from treatment.

However, the paper has limitations.

The study looked at the average effect of drugs rather than how they worked for individuals of different ages or gender, the severity of symptoms and other characteristics. Furthermore, most of the data in the meta-analysis covered eight weeks of treatment, so the findings might not apply to longer-term use.

So what does this mean?

We still face the same challenge! Even though antidepressants are effective, doctors need more information to help them know, from the array of antidepressant medication available, which is the best treatment option for each of their patients.

This is important as 65% of patients fail to achieve remission following their first time antidepressant treatment. Furthermore, finding whether a treatment is effective or not can take many weeks or even months. During this time, 30% of patients will simply quit their treatment, followed by another 30%, with their second-course of treatment.

Which means though there may be a good antidepressant medication out there, patients may not even get the chance to try it!

In 2006, the USA completed the STAR*D study (Sequenced Treatments Alternative to Relieve Depression) which assessed the effectiveness of depression treatments in both primary and specialty care settings. It was the largest and longest study ever conducted to evaluate depression treatment. The aim was to develop a common sequence of treatment for patients with major depression.

What this study does emphasize is the need for patients to find the right antidepressant treatment sooner.

And this is where I believe AI tools like Taliaz’ Predictix Antidepressant come in and can help change the depression treatment landscape.

We can now empower doctors to personalize antidepressant prescriptions, so patients can find the best treatment sooner.

In fact, Predictix Antidepressants global big data reservoir was developed using STAR*D row data (with the permission of the USA National Institute of Health) alongside other data sources.

By analyzing genetic, demographic and clinical big data sets, Predictix provides a personalized report with predictive information about antidepressant drugs and which one is best suited to the patient’s genetic makeup and health record.

It is a doctor-centric decision support tool to be used prior to prescribing antidepressants. For patients, we can ease the “odyssey” of searching – they simply need to provide a DNA sample alongside responding to a short set of designated questions.

Which means, doctors are now better informed to know from the dozens of antidepressants medications on the market, which one is the right treatment for each patient.

So where next for depression sufferers?

The promise of personalized medicine is of course the ultimate goal for any treatment strategy.

And the good thing is we are getting there. AI tools will help us analyze even greater amounts of previously unavailable clinical, environmental, demographic and genetic data to personalize treatment.

These activities are supported by the vast clinical research being conducted in this field. As I have discussed in my previous blog – The future of clinical studies: AI personalized, real-world studies – new clinical trial approaches will uncover new insights. These new discoveries will help identify specific genetic markers, as well as clinical and biological signals to help clinicians and patients decide what is the best treatment. We can also improve our understanding of how to help patients who have treatment-resistant depression.

There is a huge shift underway to incorporate personalized medicine approaches to improve outcomes for patients. The Lancet study provides compelling evidence to support the work we are doing.

We must remember that depression can be a devastating mental illness, which can cause huge amounts of distress for patients and their loved ones.

The Lancet work combined with recent advances in AI-driven technology and personalized medicine, will empower our doctors to bring a paradigm shift in treating depression – helping significantly change patients’ lives for the better!

As always, I look forward to seeing these developments in clinical practice.